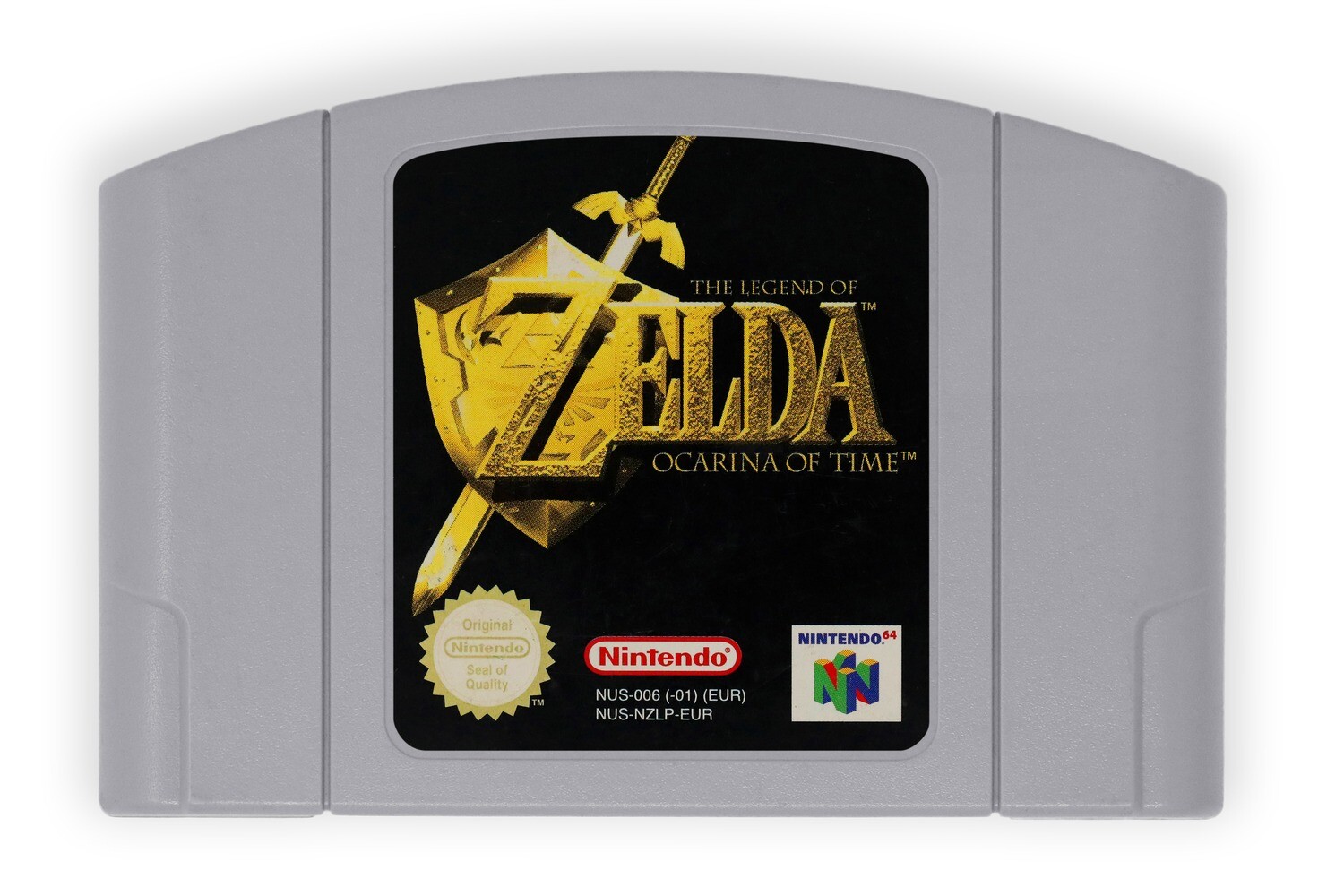 The Legend of Zelda: Ocarina of Time (N64 PAL)

As a young boy, Link is tricked by Ganondorf, the King of the Gerudo Thieves. The evil human uses Link to gain access to the Sacred Realm, where he places his tainted hands on Triforce and transforms the beautiful Hyrulean landscape into a barren wasteland. Link is determined to fix the problems he helped to create, so with the help of Rauru he travels through time gathering the powers of the Seven Sages.

The Legend of Zelda: Ocarina of Time is an action-adventure game developed and published by Nintendo for the Nintendo 64. It was released in Japan and North America in November 1998, and in Europe, Australia and New Zealand the following month. Ocarina of Time is the fifth game in the Legend of Zelda series, and the first with 3D graphics. Originally developed for the 64DD peripheral, it was instead released on a 256-megabit (32-megabyte) cartridge, the largest-capacity cartridge Nintendo produced at that time.

The player controls Link in the fantasy land of Hyrule on a quest to stop the evil Ganondorf, king of the Gerudo tribe, from obtaining the Triforce, a sacred wish-granting relic. He travels through time and navigates dungeons to awaken the Seven Sages, who can seal Ganondorf forever. Ocarina of Time introduced features such as a target-lock system and context-sensitive buttons that have since become common in 3D adventure games. Music plays an important role: to progress, the player must learn to play numerous songs on an ocarina, and the game was reportedly responsible for increased interest in the instrument.

In Japan, more than 820,000 copies were sold in 1998, making it the year's tenth-bestselling game. During its lifetime, over a million copies were sold in Japan, with over seven million sold worldwide. The game won numerous awards and accolades and is considered by many to be one of the greatest video games ever made, with numerous publications having ranked it the best video game of all time. It is also the highest-rated game on review aggregator site Metacritic and the second highest-rated on GameRankings, behind Super Mario Galaxy, also made by Nintendo.

Ocarina of Time was followed by a direct sequel, The Legend of Zelda: Majora's Mask, in 2000. It was ported to the GameCube alongside Ocarina of Time Master Quest, an alternative version of the game with new puzzles, and was included in The Legend of Zelda: Collector's Edition in 2003. It was one of the few games ported to the iQue Player, and was released on the Virtual Console service for the Wii in 2007 and Wii U in 2015. The re-releases were well received, though some critics felt the game had aged badly. A remake for the Nintendo 3DS, Ocarina of Time 3D, was released in 2011 with updated graphics and autostereoscopic 3D effects; it includes Master Quest's rearranged dungeons, absent from the Wii, Wii U, and iQue versions.